Nicole Elikolani Prescovia Scherzinger (also known as Nicole Kea) (born June 29, 1978) is an American pop/R&B singer, songwriter, dancer, and occasional actress best known for her role as the lead vocalist for the Pussycat Dolls.
Scherzinger was born in Honolulu, Hawaii to a Filipino father and a Hawaiian/Russian mother. Her mother Rosemary was 18 at the time of Nicole's birth and lived in an inner city neighborhood and separated from her father when Nicole was a baby. The family moved to Louisville, Kentucky with her sister Ke'ala and German American stepfather Gary Scherzinger.
She stated she had a "conservative Catholic" upbringing. Scherzinger began her life as a performer in Louisville, attending the Youth Performing Arts School at duPont Manual High School and performing with Actors Theatre of Louisville. Scherzinger majored in theater arts at Wright State University but put her studies on hold in 1999 to sing backing vocals for the rock band Days of the New. Scherzinger appeared on the second album by Days of the New, released in 1999. She also recorded two songs with Barry Drake's F.O.B, which were released in 2001.In 2001, Scherzinger competed in the premiere season of The WB's television show Popstars, on which she earned a spot in the all-girl pop group Eden's Crush. She became one of the main vocalists for the group. The group's 2001 single "Get Over Yourself (Goodbye)" peaked at number one in sales and hit the top ten on Billboard Hot 100. "Love This Way" was the second single chosen from the Popstars album; however, their record company, London-Sire Records, folded and the group eventually disbanded. Songwriter Kara DioGuardi contributed one track to the album, and later went on to co-write with Scherzinger for PCD and Her Name is Nicole.After the disbanding of Eden's Crush, Scherzinger made a few promotional solo appearances under the stage name of Nicole Kea, including covering "Breakfast in Bed" for the soundtrack to 50 First Dates in 2003.

Scherzinger worked with Yoshiki of Japanese rock band X Japan on in his Violet UK project. She sang the English version of "I'll Be Your Love" live with the Tokyo Symphonic Orchestra. The track also appeared on the 2003 Various Artists album Exposition of Global Harmony.In May 2003, Scherzinger joined the Pussycat Dolls burlesque troupe, who were being re-cast as recording artists. She had first seen them performing on The Late Show with David Letterman in November 2002, where Carmen Electra sang "Big Spender" from the Bob Fosse musical Sweet Charity. In 2006, Scherzinger said "It caught my eye because I’d played Velma Kelly in [Fosse's] Chicago in college." The Pussycat Dolls now have world-wide status as a popular singing group, with "Don't Cha", "Buttons" and "Stickwitu" as top five hits in the U.S.. The album PCD went double-platinum in 2006. Scherzinger sang nearly all lead vocals on the album, with Carmit Bachar and Melody Thornton also contributing.

Scherzinger is the only group member with songwriting credits on PCD; she co-wrote "I Don't Need a Man" with Kara DioGuardi and producer Rich Harrison, and co-wrote "Buttons" with producer Sean Garrett. Another collaboration with DioGuardi, "Flirt", became a B-side to "Stickwitu" and a bonus track on PCD.

In 2006, Scherzinger toured with the Pussycat Dolls for their album promotion. It was revealed in 2006 that the Dolls are salaried employees of Interscope Records, giving the label a high level of control over the group's finances and business decisions.

Scherzinger appeared on the March 2008 cover of Men's Fitness magazine. Her latest single with the Pussycat Dolls is called "When I Grow Up".Following the popularity of "Don't Cha" and the continuing rise of the Pussycat Dolls, Scherzinger recorded a series of duets or "guest appearances", predominantly with male vocalists. In 2005, she appeared on recordings by Shaggy, Vittorio Grigolo, and Will Smith. The following year she sang on Avant's single "Lie About Us" and P. Diddy's hit "Come to Me" (which she also co-wrote). She has recently also been on a track by will.i.am along with many other musicians called "Yes We Can". Other appearances are listed in her discography.Scherzinger worked on her debut album from 2006-2008 with record producers including will.i.am, Timbaland, Kara DioGuardi, and Bryan-Michael Cox. Scherzinger announced in a March 17, 2007 interview in Winnipeg, Manitoba, that the album would be called Her Name is Nicole; It was originally slated for a 2007 release but is currently without an official release date.

The first single, "Whatever U Like", featuring rapper T.I., was released in July 2007. The song was unsuccessful commercially and with critics, and it was soon announced that "Baby Love" (released September 2007) would replace "Whatever U Like" as the "lead single" from the album. Media reports commented on the fact that both Interscope's and Scherzinger's official websites started in September 2007 to refer to "Baby Love" as her first single. After both these singles were unsuccessful in North America ("Baby Love" charted well in Europe and Brazil however), a poll was placed on Scherzinger's website, asking fans to vote for the third single. Choices include: "Supervillian", "Happily Never After", "Who's Gonna Love You" and "Power's Out". However on November 28, the poll was updated and the songs "Power's Out" and "Supervillian" were removed and replaced with "Puakenikeni" and "Physical". It was announced via the website on December 10 that "Puakenikeni" was to be the next official single to be taken from the album, however it has yet to be fully released internationally.

"Supervillian" and "Puakenikeni" were both released as iTunes downloads only. As with Scherzinger's earlier solo singles, they failed to make any impact on the U.S. charts. Following this, Interscope announced that Scherzinger's album would be put on hold for the time being.In April 2008, Scherzinger recorded a cover version of "Rio" by Duran Duran for an advertising campaign for Unilever's Caress brand of body wash. It has been announced that this will be her next single, and a commercial video has already been released. "Rio" will be released to radio in early May 2008, and the full length music video will be premiering on MTV and other music channels on the following months. Scherzinger appeared in the TV comedy My Wife and Kids. She briefly appeared in the movie Chasing Papi as Miss Puerto Rico, whose appearance as a candidate was impersonated by the character of Roselyn Sanchez, with whom Scherzinger shared a physical resemblance. She also had a small role in the 2003 film Love Don't Cost a Thing. Scherzinger has recently done a commercial for The CW Television Network promoting their 2007-2008 Fall Primetime schedule – Get Into The CW.

In October 2007, Scherzinger appeared on two episodes of UK TV show X Factor Season 4 in which she helped Sharon Osbourne pick her finalists in her home in Los Angeles. Scherzinger also turned up as a member of the audience in the finale of X Factor Season Four. None of the other Pussycat Dolls were present.

In 2008, she appeared on Pussycat Dolls Present: Girlicious where she sang several songs from her upcoming album, Her Name Is Nicole in front of a small crowd of fans and the contestants of the show. After the performance, she spoke with the contestants about charisma (the theme for the episode she appeared on). She also made several appearances on the show in following episodes 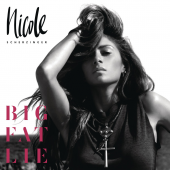 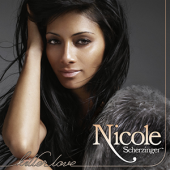 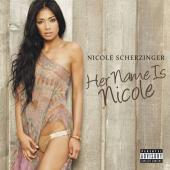 Her Name Is Nicole
Released: 2008
Tracks: 8
Including: Happily Ever After