10,000 Maniacs (named after the low-budget horror movie 2,000 Maniacs) was formed in Jamestown, NY, in 1981 by singer Natalie Merchant and guitarist John Lombardo. Other members of the sextet were Robert Buck (guitar), Steven Gustafson (bass), Dennis Drew (keyboards), and Jerry Augustyniak (drums). The group gigged extensively and recorded independently before signing with Elektra and making The Wishing Chair in 1985. Co-founder Lombardo left the band in 1986, and they continued as a quintet, releasing their second album, In My Tribe, in 1987.
This album broke into the charts, where it stayed 77 weeks, peaking at number 37. Blind Man's Zoo, the 1989 follow-up, hit number 13 and went gold.

After 1992's Our Time in Eden had finished its run on the charts, Merchant announced that she was leaving for a solo career. MTV Unplugged was released a few months after her departure. The remaining 10,000 Maniacs decided to continue performing, adding the folk-rock duo John & Mary (original member Lombardo and violinist/vocalist Mary Ramsey). The new lineup released Love Among the Ruins. Merchant released her first solo album, Tigerlily, in the summer of 1995 and a follow-up, Ophelia, in 1998. In 1999, the remaining Maniacs released The Earth Pressed Flat on Bar/None. Sadly a year later lead guitarist and founding member Robert Buck, who co-wrote some of the band's classics like "Hey Jack Kerouac," "What's The Matter Here?," and "These Are Days," died of liver failure. He was 42. 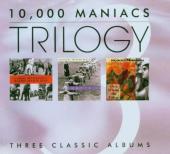 Campfire Songs
Released: 2004
Tracks: 30
Including: Let The Mystery Be (with David Byrne)

The Earth Pressed Flat
Released: 1999
Tracks: 13
Including: Hidden In My Heart

Love Among The Ruins
Released: 1997
Tracks: 11
Including: Even With My Eyes Closed

In My Tribe
Released: 1987
Tracks: 12
Including: Verdi Cries

The Wishing Chair
Released: 1985
Tracks: 15
Including: My Mother The War